TAKE ACTION: GMO Companies are Set to “Self-Regulate” Their Own GMOs 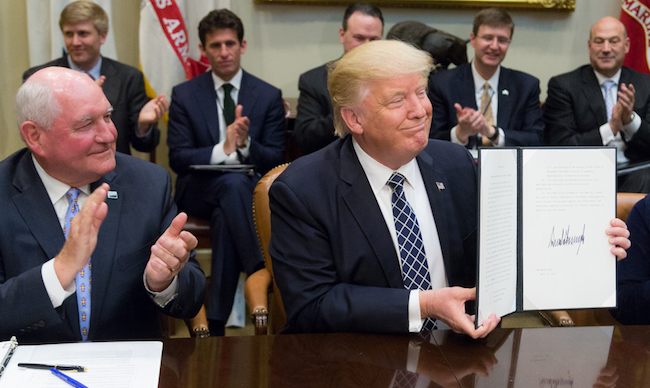 In mid-June, President Trump received a tremendous amount of attention for signing an executive order directing the USDA, FDA and EPA to make it easier for genetically-engineering plants and animals to enter the food supply.

At face value, this seemed to be an ominous development. Yet, industry observers were not particularly impressed.

“His executive order was the equivalent of sound and fury, signifying nothing. It was merely propaganda for the biotech industry,” said George Kimbrell, Legal Director at the Center for Food Safety.

However, what should be alarming organic advocates right now is the recent action taken by the USDA nearly a week before the president’s executive order, something curiously absent from the USDA’s own press release page.

On June 6th, the USDA entered into the Federal Register a proposal to change the way that GMOs are regulated. While there are several elements to this proposed rule, there are two critical aspects:

1) In many cases, companies will now be able to self-determine whether their GMOs are a plant pest (a plant pest is anything that can injure, infect or damage any plants or plant products). If they do not pose a plant pest risk, these GMOs will be excluded from government regulation.

“Not only will this proposed rule lessen the way that GE-crops are reviewed, but it will lead to more GE-contamination of organic crops and more pesticides unleashed into the environment,” added George Kimbrell.

“This is all part of the strong deregulatory stance of this administration, which wants to take safety assessments away from the government and put it in the hands of the companies,” said Michael Hansen, PhD, Senior Staff Scientist – Advocacy for Consumer Reports.

To understand how this could play out, all one has to do is look at Boeing.

After two recent crashes, it was uncovered that Federal Aviation Administration (FAA) managers pushed the agency’s safety engineers to delegate safety assessments to Boeing itself.  Several technical experts inside the FAA said that it was “inappropriate for Boeing employees to have so much authority over safety analyses of Boeing jets.”

Even though we now have tangible proof as to how dangerous this hands-off approach can be, the USDA wants to abdicate its inherent responsibility for protecting the safety of our food supply, placing it in the hands of corporations.

2) Because this proposed rule is focused on whether a GMO presents a plant-pest risk — instead of whether it merely contains bacteria from a plant-pest — this opens the door for GE-plants that produce pharmaceutical and industrial compounds (GE-proteins extracted from these plants) to be unregulated.

“While these GE drug producing-plants may not be plant pests, they could have an enormous adverse public health impact. What happens if GE-corn that produces insulin contaminates a nearby corn field and ends up in a box of cereal? The USDA has acknowledged that potential problems could emerge but is not proposing any oversight,” said Michael Hansen.

In the past, there has been significant backlash against GE-pharmaceutical and industrial crops, even from major food companies.

In 2003, Kraft Co-CEO Betsy Holden called for stricter rules for planting crops that are bioengineered to produce pharmaceuticals, calling them a threat to the food supply.

While organic and conventional food companies have not historically been on the same page when it comes to GMOs, the USDA’s proposed set of rules might bring them together.

Geoff Freeman, who took the helm of the Grocery Manufacturers Association last August, said that his organization “will stand as a champion for smart regulation.” He now has the opportunity to prove this.

“If this regulation is adopted, new GMOs will flood the market without the oversight necessary to protect consumers, public health or the environment. There is a very strong chance that consumers and the food supply will suffer irreparable harm, all with the goal of bolstering the profits of the chemical and biotech industries,” said Kim Richman, Founding Partner at Richman Law Group.

The USDA is accepting comments to this proposed rule until August 5th (you can leave one by clicking HERE).

Please tell them that GMO companies should not be allowed to self-determine their regulatory status and that all GMOs should be regulated, regardless of whether it contains a plant-pest or not.

Want to stay up-to-date on the most important news and products in the organic food world?

The post TAKE ACTION: GMO Companies are Set to “Self-Regulate” Their Own GMOs appeared first on livingmaxwell: a guide to organic food & drink.